"To very very large degree, Megadeth and Metallica both are responsible for almost all of the great new metal bands out" - Dave Mustaine

"I think that James and I are very much the same man. I think that we grabbed an angel, split him in half, and both of us are possessing that power." (Mustaine, 1983)

"Dave was all speed. He had no feeling, he had no pull-offs, he had no brilliant things. He tried to get brilliant sometimes, but it would sound awful." (Hetfield, 1983)

"James and I have always been the main thing in this band, and we always looked at Dave and Ron [McGovney] and 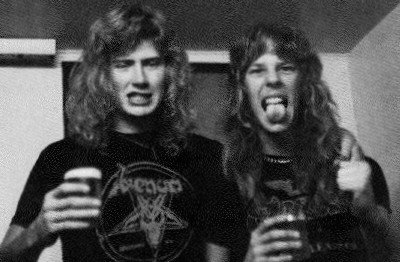 thought, 'This is fine for now, but... ' We had a vision and these guys weren't gonna last. We weren't gonna kick them out, but if we happened to find someone who could fit in, we get'em in the band." (Ulrich, 1983)

"I was convinced that I should be in the band and went to rehearsal. I was tuning up when all the other guys in the band went into another room. They weren't talking to me, so I went in and said, 'What the fuck? Am I in the band or not?' and they said, 'You've got the gig.' I couldn't believe how easy it had been and suggested that we get some beer to celebrate." (Mustaine)

"Dave came into the picture after the first 'Metal Massacre, ' after we fucking had that first song on vinyl and shit. We'd seen him in the 'Recycler, ' gave him a call and fuckin' tried him out. It was pretty interesting, pretty much the first lead guitarist in the band." (Hetfield, 1988)

"He had no idea about what our music's about, but he was very enthusiastic. It took him a rather short time to get to understand us, and that was even more cool since everybody else in LA at that time were nuts about doing a career, and imitating bands like Quiet Riot, Ratt and Mötley Crüe." (Ulrich)

"I miss them a lot. I comes and goes, and sometimes it's painful and sometimes it's very vindicating. I know there are two great bands now, but it makes me wonder if I was still in the band how much farther they would or would not have gone." (Mustaine)

"I think, though, aside from us [Megadeth], that Metallica are probably the best band at what they do. in the Eighties, we wrote a certain chapter - thrash/speed metal - but in the Nineties, it's the New Age of Heavy Metal. It's come full circle. It says in the Bible that a dog returns to its own vomit. Well, we're back to basic barf!" (Mustaine)

"Too much has been made of that shit. I told the truth - about how James ripped me off - but people didn't want to hear it. So I've learned to just forget it and move ahead. My attitude today is that two good bands emerged from that mess. Metallica are cool, but so are Megadeth. I think we can blow anyone away. We have a real commitment to our music, and that scares some people." (Mustaine)

"I really don't want to start anything with them, I don't think there's any way to win that one for me. If I say nice things about them, I'm Iying. If I say bad things, it looks like l'm trying to generate some sort of publicity. So what I've done is try to avoid the subject as much as possible - which isn't easy. When I'm asked about their album, I tell everyone 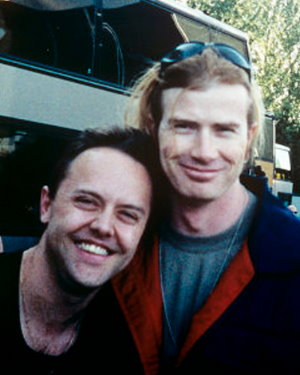 that I really like it, that it's a great album. But if they ask me about them personally, that's another matter. They're dicks who really don't know as much as they think they do. You've got to remember, they gave it to me pretty bad when I left the group. It's one thing to part ways and just bury the hatchet, but they were trying to bury it in my head. I know how they felt about me and tell anyone who'll listen that I was a drunk who was holding the band back - that was a load of shit. Things weren't going fast enough for them, so they blamed me. The good part is that now I have the chance to make them eat their words. I feel sorry for them because of what they've had to go through recently, but that really doesn't change my feelings." (Mustaine, 1987)

"A lot of that was just me getting frustrated and putting it all out at the one time. It was blown way out of proportion. At interviews, the guy would ask a question that he knew would get an answer that would make it look like I was angry with Metallica and I hated that. A lot of it was one magazine that wouldn't give up the issue until I went out of my way to resolve the situation. Now Lars Ulrich and I are good friends and we drink together. It's great that we can be friends now because when I was in Metallica, we argued a lot and that led to me drinking excessively which made the situation worse. That's in the past now and I want to look towards good things in the future." (Mustaine)

"Lars and I talk, Kirk and I have spoken, Jason and I used to be really, really close, but I haven't talked to him much lately, and James knows how I feel about him. I respect him a lot as a singer/songwriter, and I wish them all continued success - not for much longer though. God, please, go away you guys!" (Mustaine)

"I figure that Metallica are such an integral part of me - what they do, how they think - because of how we all started, these three minds. Maybe I'm flattering myself by drawing the comparison, but I think there are a lot of similarities that people deny. The mannerisms that James and I have on-stage, some are identical. A lot of the things Lars says are things I used to say. in those days I used to handle all the interviews. When I watch them, it's like I see a part of me, and I'm so happy for them... I talk to Lars all the time. For whatever reason, James and I haven't really sat down and ironed out the past. I was so hurt by getting fired with no warning that I had a lot of resentment. I was very jealous as I watched my baby go away from me. I watched their success for so long, and for the longest time I was so bitter. But then I realized that I still get royalties from the songs I wrote, and people still make the connection between us." (Mustaine, 1993)

"I keep comparing Megadeth to Metallica. I realized that often people hate the things, which they really love. I loved to play with Metallica. When they kicked me out I lost something which I loved and I started to hate them. Now every morning I fall to my knees and thank God for being able to finally see this truth." (Mustaine)

"I would love to play together with James and Lars again, and have said so in interviews. Me and David Ellefson, James and Lars, doing half mega/half meta, James singing my songs and me singing his. That would be a riot. It could suck, it could be great, but I know that it would be fun for us all to get back to the day when metal was a 'way of life' and people looked to us all as their leaders." (Mustaine, 2001)

"I did see Lars say something in our 'VH1 Behind the Music' that they would like to do something together again. I guess I am just dreaming of better days when we were all metal. I am going back, they may too, I hope. But, doing this would blow everyone away." (Mustaine, 2001)

“The great thing about Metallica's music and the lyrics, it's always going to be hopefully a motivating experience.”

Register now for our free newsletter.

The name is optional.

Thank you for your registration!

In a few minutes you will receive an e-mail with a confirmation link.

This site uses cookies. By continuing to browse this site, you are agreeing to our use of cookies. More Details Close